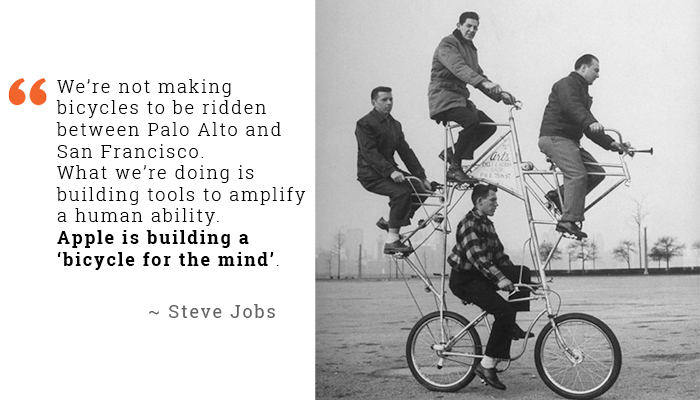 Recently, at work, we found ourselves wondering if a particular company was a competitor. So we dove into some competitive analysis. I’m certain this is a natural reaction at companies large and small.

Folks had compelling arguments for both sides of the debate and as I took it all in I couldn’t help but wonder — who cares, what’s the point?

In short, we need true, strategic thinking to explain the forces of disruption and innovation currently shaping our future. Each day, crisis to crisis, we put increasing demands on our attentions — traditional, linear forms of analysis are proving deeply inadequate in our rapidly changing business, cultural, and technological environments.

Might the sort of analysis in use today be like monitoring the gauges in a car; telling a great deal about where things are at currently, but not much in the way of where things are heading. (Unless of course you have GPS)

This really gets me thinking: while performing competitive analysis, did traditional taxi providers see the growing competition coming from Uber?

Does Uber see the growing competition coming from Google’s self-driving cars? Imagine a fleet of driverless cars, GPS guided, delivering packages, people, or even puppies, on demand.
(It’s a thought exercise, I have no idea if Google is actually exploring, but they probably are.)

YOUR COMPETITION IS OFTEN IN THE LAST PLACE YOU LOOK

However, today that’s no longer true. Not only are your industry peers no longer your main competition, they’re not even your most dangerous competition.

According to Yale professor Richard N. Foster, co-author of Creative Destruction. Business disruption is so pronounced, at the current churn rate of the Standard & Poor’s 500 Composite Index, nearly 75% of the S&P 500 will be replaced by 2027.

Imagine what the business models of the S&P 500 constituents will look like in 2027. By appreciating that facts change (and how they change), we can better cope with a world of constant uncertainty, particularly in such important areas as business and commerce.

THE RISE OF DATA-DRIVEN DECISION MAKING

Digital economy experts Kristina McElheran and Erik Brynjolfsson point out: growing opportunities to collect and leverage digital information have led many managers to change how they make decisions — relying less on intuition and more on data.

Their work highlights an important fact, “at their most fundamental level, all organizations can be thought of as “information processors” that rely on the technologies of hierarchy, specialization, and human perception to collect, disseminate, and act on insights. Therefore, it’s only natural that technologies delivering faster, cheaper, more accurate information create opportunities to re-invent the managerial machinery”.

Not surprisingly, in the digital age companies are increasingly turning to advanced analytics to improve decision making, execute business strategy and fine tune their managerial approaches.

A BICYCLE FOR THE MIND

In the early 1980s, few people were accustomed to using a computer, much less ready to buy one.

Apple’s late leader Steve Jobs loved to liken the computer to a bicycle. Check out this wonderful clip where he cites a study by Scientific American.

The study calculated the locomotive efficiency of various animals to determine which could travel from most efficiently. Turns out, the condor used the least amount of energy to move a kilometer, humans didn’t fare so well, with an unimpressive showing about a third down the list.

Fortunately enough, someone at Scientific American was insightful enough to test man with a bicycle. With a bicycle humans excelled — coming in nearly twice as efficient as the condor.

Here’s where Job’s genius shines. By using the Scientific American study as analogy, he helped make people more comfortable with adopting a computer. As Jobs described it, Apple was building a “bicycle for the mind” — a tool that could take our minds anywhere through imagination and the multiplication of power.

“Man as a toolmaker has the ability to make a tool to amplify an inherit ability that he has. And that’s exactly what we are doing here at Apple. We’re not making bicycles to be ridden between Palo Alto and San Francisco…in general what we’re doing is building tools to amplify a human ability. You could say that the Industrial Revolution was basically an amplification of a human ability: sweat. We amplified human sweat. What we’re working towards now is the ability to amplify another human ability, and we’re just starting to get a glimmering of where it’s going to go.”

That glimmering, however faint in the early 1980s is shining bright as ever today.

Smart devices, artificial intelligence, networked communications and the digitization of just about everything is rendering the analog ten-speed bike a collector’s item.

The hype behind big data is very real, but how do we cut through the noise and actually create value through the benefits of advanced analytics?

Quite simply, we need a better tool-set to manage the growing complexities brought on by abstract thinking and our “knowledge economy”.

Enhanced, data-driven decision making is the perfect tool for the job.

If Steve Job’s early Macintoch computer was a ‘bicycle for our minds’, through data science, we now have free, open access to Italian racing bikes for modern management.

To help business leaders create new tools and tap the potential in big data, analytics, and data science, follow-on research in this series will explore:

• Applying scientific methods to technological problems. How big data fits into the ‘Second Machine Age’ and how it will impact business?

• Creating a data driven strategy for sustainable growth. How do we embrace a “data culture?”

• Data networks and the flow of information. In today’s modern economy, might the structure of our relationships be more important than organizational structure?

• Use Cases: who’s using data science as a bicycle for the mind.